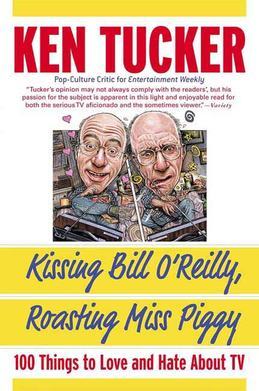 According to Ken Tucker, television is where the mass culture action really is. It's where the weasel goes pop. But for such a fluid, of-the-moment, democratic yet "cool" medium, a strangling accretion of false pieties, half-remembered history, and misplaced nostalgia has grown up around it--the prose equivalent of choking vines. In this book, Ken Tucker shares his zealous opinions about the best and worst of television, past and present

Everyone has firm beliefs about what he loves and hates about TV. If TV fans think the high point of televised political wit was M*A*S*H, or that Johnny Carson was the true king of late-night, Ken Tucker does his damnedest to convince them that they've been hoodwinked, duped by pixilated mists of memory and bad TV criticism.

His dazzling, provocative, and entertaining pieces include LOVES: James Garner as TV's Cary Grant, Pamela Anderson's breasts, David Brinkley--the only anchor who understood that being an anchor was a hollow ego-trip, Heather Locklear as the ultimate TV Personality, Bill O'Reilly--why the biggest asshole on TV is a great TV personality. And from his HATE lists: "The Sopranos" as The Great Saga That Sags, Miss Peggy as media star, Bob Newhart: Human Prozac, Worst Mothers on TV, Star Trek-Sci-Fi suckiness decked out as utopian idealism.

His perception and passion about this much maligned medium gives the lie to passive cliché's like "vegging out in front of the boob tube." This book is the TV version of Michael Moore's Stupid White Men or Bill O'Reilly's The No-Spin Zone.