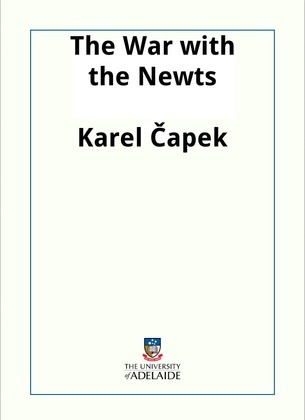 The War with the Newts

The War with the Newts / Karel ?apek; translated into English by David Wyllie

"War with the Newts (Válka s mloky in the original Czech), also translated as War with the Salamanders, is a 1936 satirical science fiction novel by Czech author Karel ?apek. It concerns the discovery in the Pacific of a sea-dwelling race, an intelligent breed of newts, who are initially enslaved and exploited. They acquire human knowledge and rebel, leading to a global war for supremacy. There are obvious similarities to ?apek's earlier R.U.R., but also some original themes." (Wikipedia)