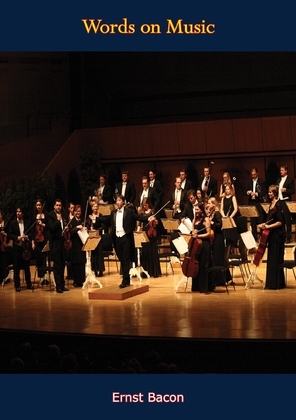 A deep and thoughtful contemplation on music by and acclaimed expert.

?Ernst Bacon, composer, pianist, and conductor, was born on May 26, 1898. He was the son of Maria von Rosthorn Bacon, a Viennese-trained musician, and Dr. Charles S. Bacon. He studied at Northwestern University, the University of Chicago, and the University of California, and also privately with Alexander Raab, Glenn Dillard Gunn, Ernest Bloch, and Karl Weigl. Among the numerous awards and grants he received are the Bispham Award, commissions from the Ditson Fund and the League of Composers, a Pulitzer Traveling Scholarship in Music, three Guggenheim Fellowships.

A multi-faceted musician, Bacon composed and conducted symphonies, operas, piano concertos, musical theater pieces, ensemble and solo instrumental pieces, and vocal works. In addition, he performed as a pianist in Europe and America, and he conducted the WPA orchestra in California from 1935 to 1937. He taught and was an administrator at the Eastman School of Music of the University of Rochester (1926-27), Syracuse University?s music department (1945-47), and Converse College in South Carolina (1938-45).

He distinguished himself as a writer with such works as Notes on the Piano, The Honor of Music, and Words on Music. In Our Musical Idioms, Bacon presented a new theory of scale models derived from diatonic scales. He was also music critic for The Argonaut, the weekly publication of Converse College. Ernst Bacon was respected as a philosopher by a close circle of friends who were fortunate enough to see his unpublished writings, [e.g. Imaginary Dialogues and his many poems]. He was a highly opinionated man, a fact evident from his large volume of letters to the editors of several major and not so major serials.

Ernst Bacon married four times and had six children. He died on March 16, 1990 in Orinda, California.??Library of Congress