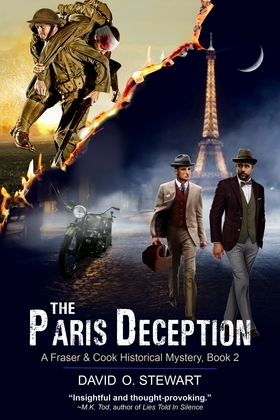 The Paris Deception (A Fraser and Cook Historical Mystery, Book 2)

Unlikely Friends Unite to Save a Wrongly Accused American Soldier and a Fragile Treaty of Peace in The Historical Mystery, The Paris Deception, from Author David O. Stewart

In the wake of The Great War, the city of Paris unites in jubilant celebration at the arrival of United States President, Woodrow Wilson. But amidst the prospect of peace, Parisians are dying as the Spanish influenza reaches epidemic proportions.

An expert on deadly illnesses, Dr. Major Jamie Fraser, is called in to advise the president's own doctor on how best to avoid the deadly disease and discovers, despite Wilson's robust appearance, the man is frailer than most realize.

While trying to determine the source of Wilson's maladies, Fraser encounters a man he has not seen for nearly twenty years: Speed Cook--ex-professional ball player and now advocate for Negro rights. Cook is also desperate to save his son Joshua, an army sergeant wrongly accused of desertion.

When the precarious German government balks at the grim terms of the peace treaty, Cook and Fraser discover that to save Joshua, they must find a way to preserve the fragile treaty, which may be the only barrier standing between Europe and another brutal war.

Publisher's Note: The Fraser and Cook Historical Mystery Series will be enjoyed by fans of American history and period mystery novels. Free of graphic sex and with some mild profanity, this series can be enjoyed by readers of all ages.

"Stewart deftly depicts the mood of an era and the colorful figures who shaped it." ~Publishers Weekly, September 2015

"Stewart moves characters from The Lincoln Deception to the period just after the end of WWI. The historical details and interaction with famous figures make for an intriguing read." ~RT Book Reviews, September 2015

"The post-armistice negotiations provide a fascinating look at the jockeying for power among countries who are ostensibly allies." ~Historical Novel Society, November 2, 2015