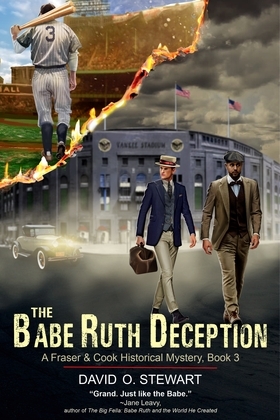 A Country Doctor and Ex-Ballplayer Save "The Bambino" from Thugs, the Baseball Commissioner, and Himself in the Historical Fiction Novel, The Babe Ruth Conspiracy, from Author David O. Stewart

In 1920, Babe Ruth--larger than life on the ball field and off--is enjoying a record-breaking season in his first year as a New York Yankee when his 1918 World Series win falls under suspicion of being "fixed."

Then rumors start that his silent movie, Headin' Home, was bankrolled by the top aide to gambling kingpin, Arnold Rothstein.

Ruth turns to Speed Cook--a professional ballplayer before the game was segregated and who now promotes Negro baseball--for help. If anyone knows the dirty underbelly of America's favorite pastime, it's Cook.

While Cook, Fraser, and Eliza dig for the truth, protecting the oftentimes-reckless Ruth from thugs and the new baseball commissioner proves even more dangerous when they come face-to-face with hidden power-hitters who are playing for keeps.

Publisher's Note: The Fraser and Cook Historical Mystery Series will be enjoyed by fans of American history and period mystery novels. Free of graphic sex and with some mild profanity, this series can be enjoyed by readers of all ages.

"Within these pages, he ushers us into the randy, gritty, wanton world of Babe Ruth, just arrived in New York from Boston, where he would power the Yankees?hell, the whole damn city?for the next decade. It is a world filled with molls and toughs, crooked pols and bootleggers, gamblers and righteous cops, not to mention Stewart?s beloved characters, Speed Cook, the wise head and former Negro Leaguer, and Dr. Jamie Fraser, who have teamed up before in previous fictions.

The texture of the city is rendered with precision and believability. When Stewart describes the new impediment at the corner of 42nd and Fifth Avenue, the city?s first traffic tower, a reader can see the snarl of horse-drawn wagons, bicycles, pedestrians and oh so many automobiles??machines? in the argot of the Twenties--clogging the street. Even the Babe had to stop for that.

The book is full of such knowing details like the Thomas splint, an invention of World War I medicine, that saves Jamie Fraser?s daughter from losing her leg.

Larger-than-life Ruth is made palpable through a mosaic of small but unassailable images. Ruth, resplendent in a red satin dressing gown worn over a pair of green and white diamond pajamas, earns ?a low whistle? from Cook when he is admitted to the Babe?s sumptuous apartment in the Ansonia Hotel. It earns something more important from the reader: a belief in narrative plausibility and in the characters that inhabit it.

So, when Stewart writes of the Babe that getting angry at him was a waste of time, ?like losing your temper at a thunderstorm,? you know he knows what he?s talking about.

~Jane Leavy, Author of The Big Fella: Babe Ruth and the World He Created