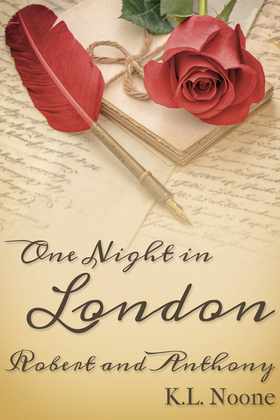 One Night in London: Robert and Anthony

Robert Thorne would prefer not to get married. He enjoys his life: a viscount's younger brother, a lighthearted rake, fond of men and women and sensational novels. Unfortunately, tonight's ball is intended to celebrate his engagement. And his intended husband comes with a fortune, enough to repair the Thorne family's failing finances and secure their future. But they've barely spoken two words to each other, and the young man's very shy and very innocent -- someone Robert's brother's chosen for him, not the person Robert wants.

But the person Robert wants is exactly the person he shouldn't: Anthony, his secretary. Anthony's the best and most organized part of Robert's life -- and off-limits, because Anthony's employed by the family to keep an eye on him ...

Anthony Price has two secrets. Everyone knows that his family used to be wealthy, and that Anthony's needed to find employment to support himself and his mother and sister. But no one knows that he has another life -- and growing success as an author of lurid novels, written under a pen name. And no one knows that he's hopelessly in love with Robert Thorne, who is engaged to another man.

Anthony will do anything to ensure Robert's happiness -- but when the engagement ball ends in disaster, secrets are revealed, hearts are exposed, and everything can change ... on one night in London.