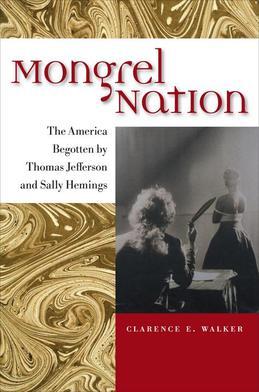 The debate over the affair between Thomas Jefferson and Sally Hemings rarely rises above the question of "Did they or didn't they?" But lost in the argument over the existence of such a relationship are equally urgent questions about a history that is more complex, both sexually and culturally, than most of us realize. Mongrel Nation seeks to uncover this complexity, as well as the reasons it is so often obscured.

Clarence Walker contends that the relationship between Jefferson and Hemings must be seen not in isolation but in the broader context of interracial affairs within the plantation complex. Viewed from this perspective, the relationship was not unusual or aberrant but was fairly typical. For many, this is a disturbing realization, because it forces us to abandon the idea of American exceptionalism and re-examine slavery in America as part of a long, global history of slaveholders frequently crossing the color line.

More than many other societies--and despite our obvious mixed-race population--our nation has displayed particular reluctance to acknowledge this dynamic. In a country where, as early as 1662, interracial sex was already punishable by law, an understanding of the Hemings-Jefferson relationship has consistently met with resistance. From Jefferson's time to our own, the general public denied--or remained oblivious to--the possibility of the affair. Historians, too, dismissed the idea, even when confronted with compelling arguments by fellow scholars. It took the DNA findings of 1998 to persuade many (although, to this day, doubters remain).

The refusal to admit the likelihood of this union between master and slave stems, of course, from Jefferson's symbolic significance as a Founding Father. The president's apologists, both before and after the DNA findings, have constructed an iconic Jefferson that tells us more about their own beliefs--and the often alarming demands of those beliefs--than it does about the interaction between slave owners and slaves. Much more than a search for the facts about two individuals, the debate over Jefferson and Hemings is emblematic of tensions in our society between competing conceptions of race and of our nation.