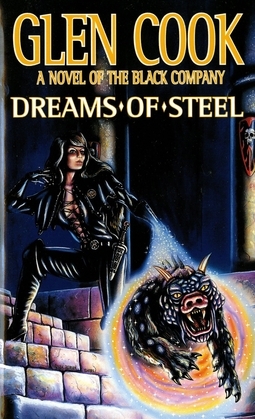 Dreams of Steel is Book 5 in Glen Cook's fantasy masterpiece, The Chronicles of the Black Company.

Croaker has fallen and, following the Company's disastrous defeat at Dejagore, Lady is one of the few survivors?determined to avenge the Company and herself against the Shadowmasters, no matter what the cost.

But in assembling a new fighting force from the dregs and rabble of Taglios, she finds herself offered help by a mysterious, ancient cult of murder?competent, reliable, and apparently committed to her goals.

Meanwhile, far away, Shadowmasters conspire against one another and the world, weaving dark spells that reach into the heart of Taglios. And in a hidden grove, a familiar figure slowly awakens to find himself the captive of an animated, headless corpse.

Mercilessly cutting through Taglian intrigues, Lady appears to be growing stronger every day. All that disturbs her are the dreams which afflict her by night?dreams of carnage, of destruction, of universal death, unceasing...