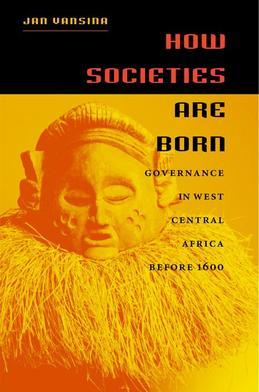 How Societies Are Born: Governance in West Central Africa before 1600

Like stars, societies are born, and this story deals with such a birth. It asks a fundamental and compelling question: How did societies first coalesce from the small foraging communities that had roamed in West Central Africa for many thousands of years?

Jan Vansina continues a career-long effort to reconstruct the history of African societies before European contact in How Societies Are Born. In this complement to his previous study Paths in the Rainforests, Vansina employs a provocative combination of archaeology and historical linguistics to turn his scholarly focus to governance, studying the creation of relatively large societies extending beyond the foraging groups that characterized west central Africa from the beginning of human habitation to around 500 BCE, and the institutions that bridged their constituent local communities and made large-scale cooperation possible.

The increasing reliance on cereal crops, iron tools, large herds of cattle, and overarching institutions such as corporate matrilineages and dispersed matriclans lead up to the developments treated in the second part of the book. From about 900 BCE until European contact, different societies chose different developmental paths. Interestingly, these proceeded well beyond environmental constraints and were characterized by "major differences in the subjects which enthralled people," whether these were cattle, initiations and social position, or "the splendors of sacralized leaders and the possibilities of participating in them."