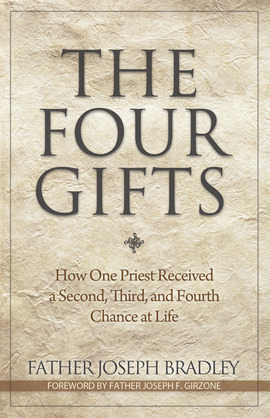 The Four Gifts: How One Priest Received a Second, Third, and Fourth Chance at Life

By all rights, Father Joseph Bradley should be dead. If past usage of beer, marijuana, and cocaine didn't do the trick, then certainly heart failure should have. Instead, by the grace of God, he is alive, clean, sober, and a functioning Catholic priest with another man's heart beating in his chest. But it came at a huge cost.

While Joe was in his late teens, his father died suddenly. The loss was devastating and Joe's emotional desolation found escapist bliss in a beer bottle and cocaine vial, and he pledged irrevocable devotion to both. The slide into the abyss was ugly, and Joe finally sought help because there was nowhere else to go—which led him to serve others as a Catholic priest. The day of Joe's ordination, an old friend came to the mass and announced for all to hear, "Well, now I can say I've seen a miracle."

Joe functioned for fifteen years as a sober priest before his heart gave out from the same heart disease that killed his father. But another miracle came his way, and he was blessed with a new heart—a gracious gift from a family during the most painful moment of their lives.

Joe has been granted the blessing of four gifts: faith, sobriety, a new heart, and a fulfilling ministry. As Father Joe says, "Gratitude inspired this book. I owe it to people who helped rescue me from alcohol and drugs, and I owe it to my heart donor for giving me yet another chance at life."