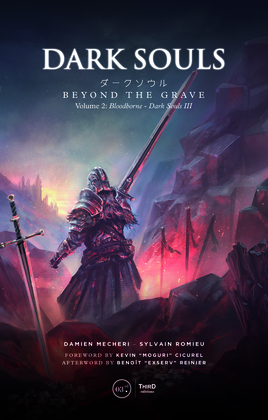 Dark Souls. Beyond the Grave - Volume 2

We thought we had gone through the topic in the first volume, those two games opened new pists of reflexions.

An indinspensale ebook for all the fans of the game Dark Souls !

The project, christened Project Beast, began soon after the Astorias of the Abyss DLC was released in August 2012. At the time, FromSoftware was also beginning to build Dark Souls II, its cash cow. Miyazaki kept his distance from this sequel, which was handed off to Tomohiro Shibuya and Yui Tanimura, with support from the FromSoftware president and creator of King's Field, Naotoshi Zin, who supervised the game system.
On his end, Hidetaka Miyazaki formed a trusted team of regular collaborators, such as lead programmer Jun Itô (who had already filled this role for Demon's Souls and Dark Souls), composer and lead sound designer Tsukasa Saitô (Armored Core games), and most of his regular artists: Daisuke Satake, Masanori Waragai and Hiroshi Nakamura. The success of Demon's Souls, and the even greater success of Dark Souls, allowed FromSoftware to grow its ranks significantly. In total, no fewer than fifty programmers participated in the project, along with around twenty game system designers and fifty people working on visual creation (animation, scenery, characters, etc.). Thanks to financial support from Sony, many Japanese, Chinese and Taiwanese studios were sub-contracted during the production to help with graphics and visuals.