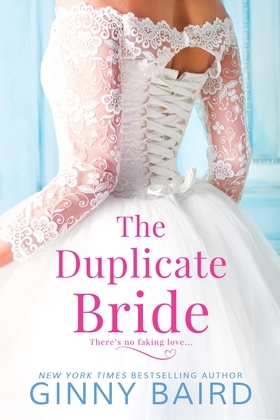 Saying ?I do? has never been this much fun in this charming new romance from New York Times bestselling author Ginny Baird.

Hope Webb can?t believe her twin sister, Jackie, is begging her to swap places and play fiancée at Jackie?s pre-wedding festivities. Sure, it?s only a business-deal sort of marriage, but Hope is a carb-loving teacher who enjoys curling up with a good book. Jackie is a workaholic whose idea of a good time is a brisk five-mile run at the crack of dawn. The two sisters couldn?t be more opposite.

Now Hope is stuck in the middle of a warm, tight-knit family she can?t help but adore and a groom who turns out to be entirely wonderful...for her.

Hotel magnate Brent Albright knows something is off about his fiancée, but he doesn?t care. Gone is the driven woman with similar career goals, and in her place is someone warm and funny who not only charms his family but him as well. She?s doing everything she can to avoid him, but that?s probably just nerves. Two people about to wed couldn?t know each other less.

Now Brent is determined to woo his fiancée, for real this time, because the more he gets to know her, the more his sweet fiancée turns out to be entirely wonderful...for him.

And that?s when things start to get really complicated...