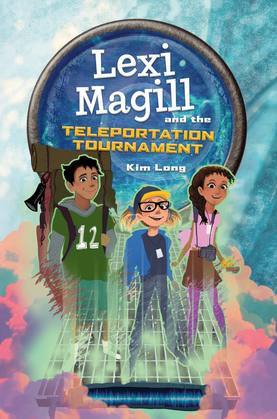 Lexi Magill and the Teleportation Tournament

For fans of The Amazing Race, Lexi Magill and the Teleportation Tournament is the perfect adventure for middle grade readers who like scavenger hunts and puzzle-solving.

Twelve-year-old physics whiz Lexi Magill won't let anything stop her from winning Wisconsin's Teleportation Tournament--the annual competition where teams teleport around the world to solve science-based puzzles. She needs the prize money if she wants to re-enroll in the science academy her parents can no longer afford. Added bonus: she'll be able to reconnect with her best friend Haley.

But Lexi's two teammates put a wrench in her plans. When one misreads a clue that lands the team in a castle in Germany, and the other loses her teleportation medallion in Poland, Lexi wonders what she's gotten herself into. Struggling to keep her team under control as the race rages on, Lexi not only has to figure out how to get back on course (literally), but she must decide how far she's willing to go to win, and who her real friends are. With riddles to solve and messages to decode, this interactive read won't disappoint!