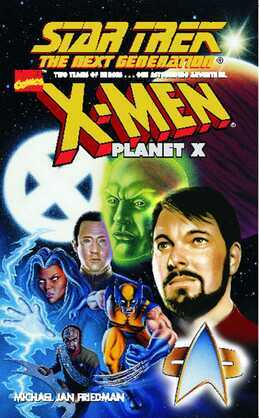 On the planet Xhaldia, ordinary men and women are mutating into bizarre creatures with extraordinary powers. But is this a momentous evolutionary leap or an unparalleled catastrophe? The very fabric of Xhaldian society is threatened as fear and prejudice divide the transformed from their own kin.

Dispatched to cope with the growing crisis, Captain Picard and the crew of the Starship Enterprise™ receive some unexpected visitors from another reality -- in the form of the group of mutant heroes known as the uncanny X-Men®. Storm, leader of the X-Men, offers their help in resolving a situation that is agonizingly similar to the human/mutant conflicts of their own time and space.

But when hostile aliens appear in orbit around Xhaldia to try and abduct the transformed for use as a superpowered force in an attack on the Federation, even the combined forces of the crew of Starfleet and the X-Men may be unable to prevent an inferno of death and destruction.

Starfleet's finest crew and Earth's greatest mutant heroes will need all their powers and abilities to save the Xhaldian people and stop a deadly threat to the Federation.