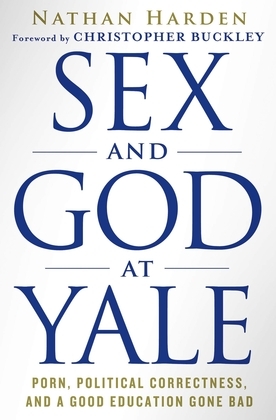 Sex and God at Yale

To glimpse America's future, one needs to look no further than its college campuses. Of those institutions, none holds more clout than Yale University, the hallowed "cradle of presidents." In Sex and God at Yale, recent graduate Nathan Harden undresses perversity among the Ivy and ideology gone wild as the upper echelon of academia is mired in nothing less than a full-fledged moral crisis.

Three generations ago, William F. Buckley's classic God and Man at Yale, a critique of enforced liberalism at his alma mater, became a rallying cry of the conservative movement. Today Harden reveals how a loss of purpose, borne of extreme agendas and single-minded political correctness shielded under labels of "academic freedom," subverts the goals of higher education.

Harden's provocative narrative highlights the implications of the controversial Sex Week on campus and the social elitism of the Yale "naked party" phenomenon. Going beyond mere sexual expose, Sex and God at Yale pulls the sheets off of institutional licentiousness and examines how his alma mater got to a point where:

Much more than this, Harden examines the inherent contradictions in the partisan politicizing of higher education. What does it say when Yale seeks to distance itself from its Divinity School roots while at the same time it hires a Muslim imam with no academic credentials to instruct students? When the same school that would not allow ROTC on its campus for decades invites a former Taliban spokesperson to study at the university? Or employs a professor who praised Hamas terrorists?

As Harden asks: What sort of moral leadership can we expect from Yale's presidents and CEOs of tomorrow? Will the so-called "abortion artist" be leading the National Endowment for the Arts in twenty years? Will a future president be practicing moves he or she learned during Sex Week in the closet of the Oval Office? If tyrants tell little girls they aren't allowed to go to school, will an Ivy-educated Taliban emissary be the one to deliver the message?

Sex and God at Yale is required reading for the parent of any college-bound student?and for anyone concerned about the direction of higher education in America and the implications it has for young students today and the leaders of tomorrow.