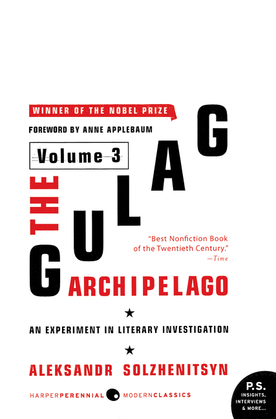 by Aleksandr I. Solzhenitsyn (Author)
Excerpt
Nonfiction History History by country Europe Russia
warning_amber
One or more licenses for this book have been acquired by your organisation details
EPUB
26 loans, One at a time
Details

Volume 3 of the Nobel Prize winner’s towering masterpiece: Solzhenitsyn's moving account of resistance within the Soviet labor camps and his own release after eight years. Features a new foreword by Anne Applebaum.

“The greatest and most powerful single indictment of a political regime ever leveled in modern times.” —George F. Kennan

“It is impossible to name a book that had a greater effect on the political and moral consciousness of the late twentieth century.” —David Remnick, New Yorker

“Solzhenitsyn’s masterpiece. . . . The Gulag Archipelago helped create the world we live in today.” —Anne Applebaum, Pulitzer Prize-winning author of Gulag: A History, from the foreword