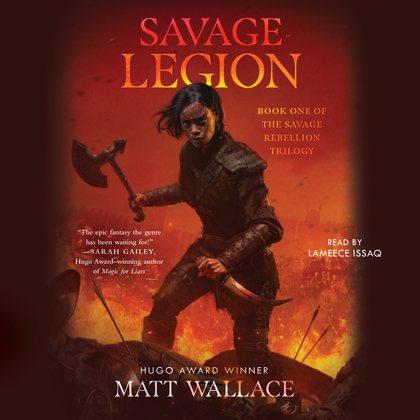 An epic fantasy by Hugo Award-winning author Matt Wallace about a utopian city with a dark secret…and the underdogs who will expose it, or die trying.

The empire relies on them. The Savages are the greatest weapon they ever developed. Culled from the streets of their cities, they take the ones no one will miss and throw them, by the thousands, at the empire’s enemies. If they live, they fight again. If they die, there are always more to take their place.

Evie is not a Savage. She’s a warrior with a mission: to find the man she once loved, the man who holds the key to exposing the secret of the Savage Legion and ending the mass conscription of the empire’s poor and wretched.

But to find him, she must become one of them, to be marked in her blood, to fight in their wars, and to find her purpose. Evie will die a Savage if she has to, but not before showing the world who she really is and what the Savage Legion can really do.