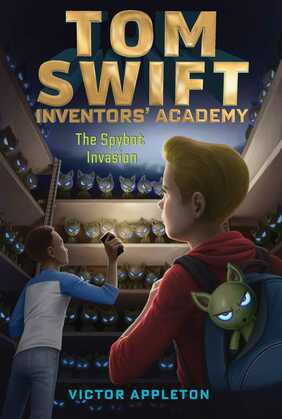 Tom and his friends get to the bottom of a practical joke gone wrong in this fifth novel in Tom Swift Inventors’ Academy?perfect for fans of The Hardy Boys or Alex Rider.

It’s another day at the Swift Academy when Tom starts finding little troll-like figures around campus. And he’s not the only one. Much to the amusement and curiosity of students, these dolls are appearing all over the school. But even after they’re collected by faculty, a second wave mysteriously appears?except these replacements record audio and play it back for surrounding listeners. Before everyone knows it, secrets and gossip are revealed across campus, and suddenly the figures aren’t nearly as fun as they used to be.

What seemed to start as a practical joke quickly turns into something more serious when yet another wave of more advanced robots infiltrates the school. And these record and project video footage. It seems that no one is safe from the spybots as the academy spirals into mayhem, and it’s up to Tom and his friends to track down the culprit behind the invasion.