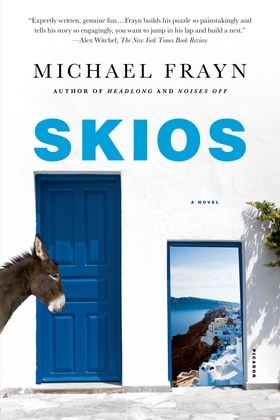 The great master of farce turns to an exclusive island retreat for a comedy of mislaid identities, unruly passions, and demented, delicious disorder

On the private Greek island of Skios, the high-paying guests of a world-renowned foundation prepare for the annual keynote address, to be given this year by Dr. Norman Wilfred, an eminent authority on the scientific organization of science. He turns out to be surprisingly youthful, handsome, and charming?quite unlike his reputation as dry and intimidating. Everyone is soon eating out of his hands. So, even sooner, is Nikki, the foundation's attractive and efficient organizer.

Meanwhile, in a remote villa at the other end of the island, Nikki's old friend Georgie has rashly agreed to spend a furtive horizontal weekend with a notorious schemer, who has characteristically failed to turn up. Trapped there with her instead is a pompous, balding individual called Dr. Norman Wilfred, who has lost his whereabouts, his luggage, his temper, and increasingly all sense of reality?indeed, everything he possesses other than the text of a well-traveled lecture on the scientific organization of science.

In a spiraling farce about upright academics, gilded captains of industry, ambitious climbers, and dotty philanthropists, Michael Frayn, the farceur "by whom all others must be measured" (CurtainUp), tells a story of personal and professional disintegration, probing his eternal theme of how we know what we know even as he delivers us to the outer limits of hilarity.