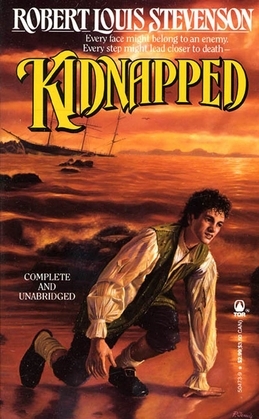 Tor Classics are affordably-priced editions designed to attract the young reader. Original dynamic cover art enthusiastically represents the excitement of each story. All editions are complete and unabridged, and feature Introductions and Afterwords.

This edition of Kidnapped includes a Foreword, Biographical Note, and Afterword by R.L. Fisher.

Young, innocent David Balfour leaves his father's gravesite to claim an inhertitance--and finds himself in a nightmare war for his very life. Betrayed by his own family. Beaten unconscious. Stuffed into the hold of a ship manned by drunken murderers. Doomed to slavery or death.

But then Balfour's captors try to kill a renegade swordsman named Alan Breck--a lethal mistake. With blood-dripping swords, Alan and David battle their way to shore...but not to safety. Breck is a rebel fighting for a cause already lost; and David is falsely charge with assassination.

Wanted by kidnappers, terrorists and an army; trapped in a land of enemies; Alan and David are locked together in a desperate race across and entire nation, toward a slim chance for freedom, safety...