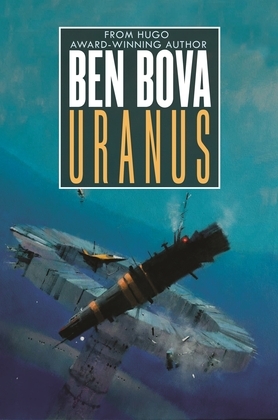 Ben Bova, author of Earth, continues his exploration of the future of a human-settled Solar System with the science fiction action adventure Uranus, the first of his Outer Planets trilogy.

On a privately financed orbital habitat above the planet Uranus, political idealism conflicts with pragmatic, and illegal, methods of financing. Add a scientist who has funding to launch a probe deep into Uranus?s ocean depths to search for signs of life, and you have a three-way struggle for control.

Humans can?t live on the gas giants, making instead a life in orbit. Kyle Umber, a religious idealist, has built Haven, a sanctuary above the distant planet Uranus. He invites ?the tired, the sick, the poor? of Earth to his orbital retreat where men and women can find spiritual peace and refuge from the world.


The billionaire who financed Haven, however, has his own designs: beyond the reach of the laws of the inner planets Haven could become the center for an interplanetary web of narcotics, prostitution, even hunting human prey.

Meanwhile a scientist has gotten funding from the Inner Planets to drop remote probes into the ?oceans? of Uranus, in search of life. He brings money and prestige, but he also brings journalists and government oversight to Haven. And they can?t have that.