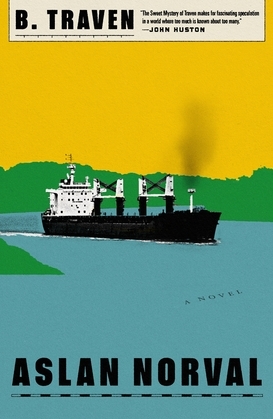 B. Traven?s last novel, first published in 1960 but never before released in English, features a larger-than-life heroine: Ms. Aslan Norval, an American millionairess with Hollywood roots and political schemes up her sleeve

Though Aslan Norval is wealthy beyond measure and contentedly married to an aging businessman, she finds herself tormented with the desire to do something epic, something no man has dared to do: she decides to build a canal across the continental United States. With the help of an uncouth Korean War veteran?whom she appoints as her right-hand man and unlikely lover?she forms a public corporation. A congressional committee of investigators, prodded by lobbyists, tries to stop the venture; but the ensuing publicity arouses the civic-minded public, and ?democratic process? insists that the canal be realized as a federal undertaking. Not only will the project relieve chronic unemployment and demobilize the armed forces, but it will also benefit the Atlantic and Pacific fleets, aid world shipping, and relieve the Cold War!

Rediscovered after B. Traven?s death in 1969, Aslan Norval is a hidden gem now unearthed?the final novel from the brilliant and beloved mind behind the cult classic The Treasure of the Sierra Madre?shedding new light on the life and work of a mysterious literary giant.