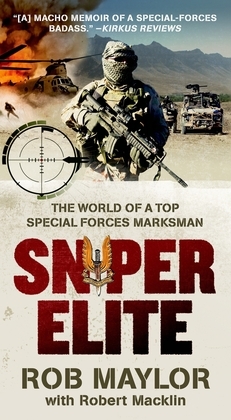 A gritty, no-holds-barred behind-the-scenes memoir of life as one of the world's top snipers

In Sniper Elite, Rob Maylor takes readers inside the closed world of the elite Special Forces sniper, detailing Maylor's dedication to the dark art of sniping and touching on the history of the great snipers who came before him. As one of Australia's most highly trained and successful combat marksmen, he tells the story of his years on the front lines, from his early service with the Royal Marines in Northern Ireland, to action in Iraq and most recently in Afghanistan where he was involved in some of the heaviest fighting in the conflict. He also chronicles his near-death experience in a Blackhawk helicopter that crashed off Fiji, killing two of his friends, and how he would walk for hours, sometimes days, through hostile country until he found the right position. Then, when the moment was right, he aimed, and with absolute precision, put the bullet just where it was going to have the most effect.

Filled with dark humor and the almost religious sense of brotherhood within such an exclusive group of warriors, this is an explosive and revealing combat memoir?and an inside look at the shadowy world of the modern sniper.