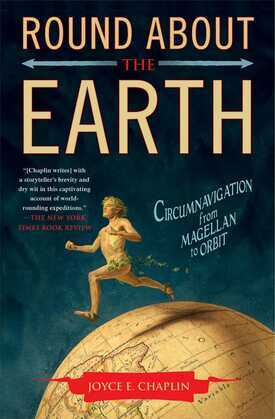 Round About the Earth: Circumnavigation from Magellan to Orbit

In this first full history of around-the-world travel, Joyce E. Chaplin brilliantly tells the story of circumnavigation. Round About the Earth is a witty, erudite, and colorful account of the outrageous ambitions that have inspired men and women to circle the entire planet.

For almost five hundred years, human beings have been finding ways to circle the Earth?by sail, steam, or liquid fuel; by cycling, driving, flying, going into orbit, even by using their own bodily power. The story begins with the first centuries of circumnavigation, when few survived the attempt: in 1519, Ferdinand Magellan left Spain with five ships and 270 men, but only one ship and thirty-five men returned, not including Magellan, who died in the Philippines. Starting with these dangerous voyages, Joyce Chaplin takes us on a trip of our own as we travel with Francis Drake, William Dampier, Louis-Antoine de Bougainville, and James Cook.

Eventually sea travel grew much safer and passengers came on board. The most famous was Charles Darwin, but some intrepid women became circumnavigators too?a Lady Brassey, for example. Circumnavigation became a fad, as captured in Jules Verne?s classic novel, Around the World in Eighty Days.

Once continental railroads were built, circumnavigators could traverse sea and land. Newspapers sponsored racing contests, and people sought ways to distinguish themselves?by bicycling around the world, for instance, or by sailing solo.

Steamships turned round-the-world travel into a luxurious experience, as with the tours of Thomas Cook & Son. Famous authors wrote up their adventures, including Mark Twain and Jack London and Elizabeth Jane Cochrane (better known as Nellie Bly). Finally humans took to the skies to circle the globe in airplanes. Not much later, Sputnik, Gagarin, and Glenn pioneered a new kind of circumnavigation? in orbit.

Through it all, the desire to take on the planet has tested the courage and capacity of the bold men and women who took up the challenge. Their exploits show us why we think of the Earth as home. Round About the Earth is itself a thrilling adventure.