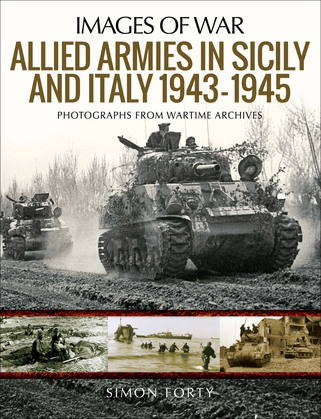 The Italian campaign was one of the most debated of the Second World War, splitting the American and British allies, and causing great disharmony. After the fall of Rome and the surrender of Italy, the invasion of Normandy led to the Italian campaign becoming a sideshow as the ‘D-Day Dodgers’ fought their way through Italy to the Alps against a grinding defence and extreme weather.

In a sequence of 200 wartime photographs Simon Forty sums up the major events of the conflict – from the landings on Sicily to the crossing of the Po. Commanded first by Sir Harold Alexander and then Mark Clark, the Allied armies (US Fifth and British Eighth)  drew men not only from Britain, the United States, France and Poland but from all over the Commonwealth – from Australia, Canada, India, New Zealand and South Africa – as well as such other countries as Brazil, Czechoslovakia, Greece and Palestine.

The devastation caused by the war in the cities, towns and countryside is part of the story, but perhaps the most powerful impression is made by the faces of the soldiers themselves as they look out from the Italian front of so long ago.