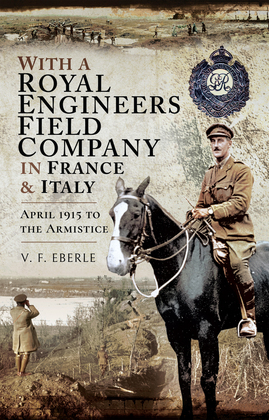 With a Royal Engineers Field Company in France & Italy

VF Eberle MC joined up on the outbreak of the war in No 2 Field Company Royal Engineers, 48th (South Midland) Division, the same company as his brother, who was a captain in it. He was commissioned before sailing for France at the end of March 1915 and remained with it for the rest of the war. In that time he saw action on the Somme and in the Advance to the Hindenburg Line before his Division took part for most of the Battle of Third Ypres (Passchendaele). Transferred to Italy at the end of 1917, he took part in the final stages of the war, including the Battle of Asiago.

Besides his eloquent description of the work of a field company RE, he spends some time in outlining his role in the development of the Bangalore Torpedo.

Based on his war time letters, diaries and records - which can now be consulted in the Imperial War Museum, it gives a detailed picture of the employment of a field company in war, both during periods of relative tranquility as well as during major offensives. There are relatively few memoirs of Royal Engineers' officers, especially of those in his position, so close to the line. The memoirs benefit from his key eye for observation and his skilful use of the material available to him, making this a fine addition to the literature of the Great War.