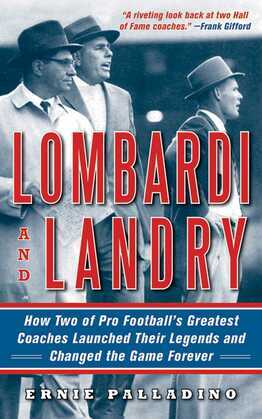 Vince Lombardi and Tom Landry could not have had two more divergent personalities. Yet, while working for the New York Giants in the mid-1950s under head coach Jim Lee Howell, the pair formed what still stands as the greatest set of coordinators on one team. Given their personalities, one might have likened Howell?s job to that of Dwight Eisenhower?s as the general struggled to control the egos and politics of his allied subordinates during WWII. But for some reason, Lombardi and Landry worked almost seamlessly, leading the Giants to the top of the NFL. In the five seasons the two men coached together between 1956 and 1959, the Giants appeared in three championship games, winning the NFL title in 56.

Both coaches would go on to NFL stardom, Lombardi with the Green Bay Packers and Landry with the Dallas Cowboys. But it was during their years as Giants coordinators that they developed the coaching philosophies they would employ later in their careers. For Lombardi, it was the reliance on the running game that started with Frank Gifford and would continue in the Packers Sweep? days of Paul Hornung. For Landry, it was his own invention of the 4-3 defense that led to the Flex? defense of his Super Bowl winners in Dallas. How they developed their ideas, and how they were allowed to implement them, was a testament not only to their genius, but Howell?s willingness to let them handle the strategic matters while he looked after the big picture.

In Lombardi and Landry, veteran sportswriter Ernie Palladino takes an in-depth look at these two legends? formative years in New York, offering up a vivid, revealing portrait of two brilliant coaches just coming into an understanding of their formidable powers.