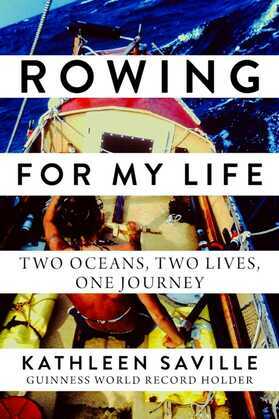 Rowing for My Life

In the tradition of Cheryl Strayed's Wild, one's woman's transformational journey rowing across the savage seatwice.

Just out of college, newly wed, and set up with her husband Curt in a small town in New York, Kathleen Saville quickly realized that an ordinary life working for a better used car and a home with a mortgage would never satisfy her thirst for freedom and adventure. The year before, she and Curt had retraced Henry David Thoreau's canoe journey through the Maine Woods, and both were veteran rowers. Inspired, she suggested that they row across the Atlantic Ocean. Returning to her hometown, living on a shoestring, they built their own twenty-five-foot ocean rowboat. They set out from Morocco and, tested by adverse currents, gales, and their own inexperience, accomplished the near impossible.

Three years later, while they attempted to row across the Pacific, Curt was washed overboard and lost their sextanttheir only means of navigation. Now, besides confronting fatigue, storms, sharks, and deadly reefs, they had to find a way to avoid becoming lost at sea and succumbing to starvation. Their ordeal in completing their crossing exposed the fissures in their marriage, and in this and subsequent adventures, Kathleen was forced to confront the difference between courage and foolhardiness. Cinematic, suspenseful, heartbreaking, and ultimately triumphant, her story of an unraveling marriage is also the account of finding her true self amid the life-and-death challenges at sea.

It is easier to sail many thousand miles through cold and storm and cannibals, in a government ship, with five hundred men and boys to assist one, than it is to explore the private sea, the Atlantic and Pacific Ocean of one's being alone.?Henry David Thoreau