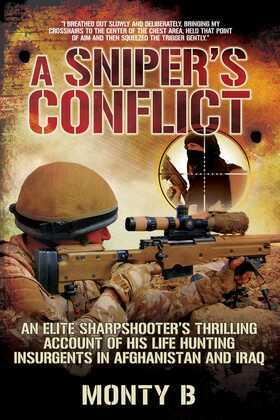 "I could make out the head and shoulders of the insurgent as he was firing in the prone position. I aimed for the centre area . . . removed the safety catch and held that point of aim. Then I slowly and deliberately operated my trigger squeezing it gently to the rear. The round impacted into the target just below the shoulder. The target seemed to slide down disappearing out of sight, the rifle muzzle remained pointing uppermost in the air."

The author sets the scene with action on a 2004 tour in Iraq where hard lessons were learnt. Next stop Helmand District, Afghanistan, after rigorous training. By now he had been a Sniper Instructor for eight years and his depth of knowledge makes this almost a sniper?s manual. This, combined with his descriptions of the sniper engagements experienced during his Battalion?s action packed tour, make this a thrilling and instructive read. He describes not just the operational background moves and tactics but his emotionstaking life even from distances of a kilometer is traumatic. Intense though the action was, there were long periods of watching and waitingcalled Enduring Patience). Snipers work in pairs so relationship and trust are all important. Snipers are elite soldiers and clearly the author is among the best of the best.

A Sniper's Conflict is a superb account of professional soldiering at the sharp end.