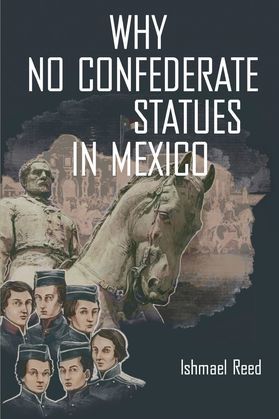 Why No Confederate Statues in Mexico

by Ishmael Reed (Author)
Non-Fiction History Other Essays Arts
PDF
55 Loans, One at a time
Details

The Civil War divides the United States. Millions, including the president, wish to maintain monuments to generals like Robert E. Lee. Referred to as "Knights" in Gone with the Wind," some generals earned their bona fides by murdering blacks, Mexicans, and Native Americans During the Battle of Chapultepec in 1847, Robert E. Lee fought children, Los niños heroes. Refusing to surrender, they were slaughtered.

Ishmael Reed's reach is vast and varied. His take down of the billion-dollar show Hamilton and its designer Lin-Manuel Miranda is priceless, as are his searing critiques of the 'Black Bogeyman' scam and the one-at-a-time tokenism of an elite who chooses winners and losers among minority artists.

Reed "says what's on his mind," be it about Quentin Tarantino and Django, white nationalism or Donald Trump. At the same time his portraits of Amiri Baraka/LeRoy Jones and actor Oliver Clark are touching and many-layered.

About Ishmael Reed and his Work

That's what I loved about Baldwin, something that I am inspired by about Baldwin, Amiri Baraka, Ishmael Reed, Gwendolyn Brooks--they were all darlings of the liberal establishment, and they rejected that status, which meant they were pushed to the margins." Cornell West

"It was a ceremonial rite of some magnitude when the great American writer, cultural theorist, and musician Ishmael Reed played a jazz composition on the piano."--Vogue, 17 Feb. 2019, coverage of Grace Wales Bonner's London fashion show.