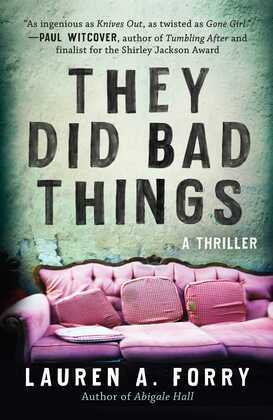 They Did Bad Things

And Then There Were None meets The Last Time I Lied in this dark and twisty psychological thriller.

In 1995, six university students moved into the house at 215 Caldwell Street. Months later, one of them was found dead on the sofa the morning after their end-of-year party. His death was ruled an accident by the police. The remaining five all knew it wasn’t, and though they went on with their lives, the truth of what happened to their sixth housemate couldn’t stay buried forever.

Twenty years later, all five of them arrive—lured separately under various pretenses—at Wolfheather House, a crumbling, secluded mansion on the Scottish isle of Doon. Trapped inside with no way out and no signal to the outside world, the now forty-somethings fight each other—and the unknown mastermind behind their gathering—as they confront the role they played in their housemate’s death. They are given one choice: confess to their crimes or die.

They Did Bad Things is a deviously clever psychological thriller about the banality of evil and the human capacity for committing horror.