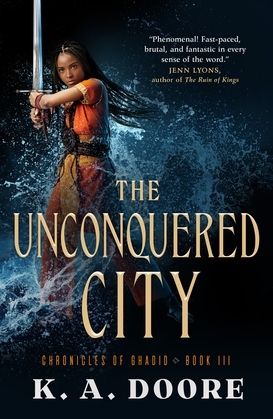 The final volume in K. A. Doore's critically-acclaimed assassin fantasy series, praised by Publishers Weekly as ?a hit with fans of Sarah J. Maas and George R.R. Martin? (starred review)

Seven years have passed since the Siege?a time when the hungry dead had risen?but the memories still haunt Illi Basbowen. Though she was trained to be an elite assassin, now the Basbowen clan act as Ghadid's militia force protecting the resurrected city against a growing tide of monstrous guul that travel across the dunes.

Illi's worst fears are confirmed when General Barca arrives, bearing news that her fledgling nation, Hathage, also faces this mounting danger. In her search for the source of the guul, the general exposes a catastrophic secret hidden on the outskirts of Ghadid.

To protect her city and the realm, Illi must travel to Hathage and confront her inner demons in order to defeat a greater one?but how much can she sacrifice to protect everything she knows from devastation?

The Chronicles of Ghadid
#1: The Perfect Assassin
#2: The Impossible Contract
#3: The Unconquered City