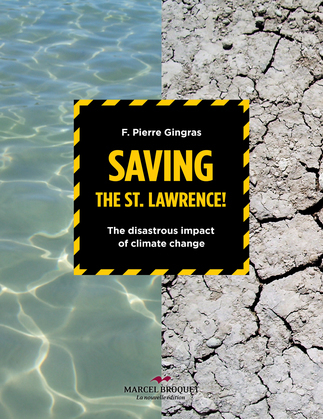 The climate changes experts predict a drying of 20 to 30 % of the water available in the Great Lakes area in the next century, a forecast already in progress. Environment Canada predicts a 24% flow decreasing.

the levels of Lake Huron and Lake Michigan are already two feet lower than normal. Over 18,000 km of shoreline and more than 1,000 sq km of richly diverse wetlands, such as those of Georgian Bay and Lake St.Pierre, are in a deplorable state. Navigation has been adversely affected, as has the drinking water supply of many communittes. Hydropower production, which could benefit greatly from better floodwater management, will be increasingly affected. And growing populations in the Great Lakes watershed constantly need more water.
As this book proposes, the entire St.Lawrence River Basin can be considered a cascade of eight lakes and reservoirs, only four of which are already controlled by the dams mentioned above, lakes Superior, Erie, Ontario ans St.Francois. According to an initial design study the construction of four additional control structures would make it possible to efficiently manage water levels independtly from the flow available throughout the entire basin from Lake Superior to Quebec City, whatever the vailable flow, at an estimated cost of $5 to $6 billion.
Considering the environmental, social and economic benefits, $5 to $6 billion is a small inversment to maintain natural historical water levels, harness floodwaters and ensure drinking water for a population of up to 200 million. Factor in the protection of 18,000 km of shoreline and over 1,000 km2 of wetlands, as well as safeguarding of the Seaway, and the project pays for itself many times over. And this still does not count hydropower production during periods of high demand, which could produce more energy than needed to finance the project in a few years. Finally, the project would add four strategically vital new roadways linking the two riverbanks.
The second part of the book present the "Northern Water" project aiming to diverse an important flow of water from the James Bay to the St. Lawrence basin and protecting both regions from the future climatic effects and adding an very important production of energy.