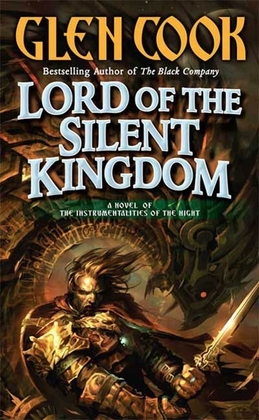 Lord of the Silent Kingdom

It's cold. The wells of power are weakening and the forces of Night grow strong. The gods are real, and still have some power, mostly to do harm. The Instrumentalities of the Night are the worst of these.

Piper Hecht, born Else Tage, survived a battle with the Instrumentalities. Now he's Captain-General of the armies fighting a crusade for Patriarch Sublime V. Intrigues swirl around the throne of the Grail Empire, as the imperial family's enemy Anne of Menand raises money to help the perpetually indebted Patriarch finance his crusades. To reduce his own vulnerability, sickly young Emperor Lothar assigns his two half-sisters?his immediate heirs?to their own realms.

Now Piper Hecht learns that the legendary sorceror Cloven Februaren, referred to as the Ninth Unknown, is still alive, more than 100 years old, and on Piper's side. As the dynastic politics of the Empire become even more convoluted, it's clear that while the old gods may be fading, they're determined to do everything they can to bend the doings of men to their own advantage.

Sieges, explosions, betrayals, Anti-Patriarchs, and suspicious deaths will ensue as the great chess game plays itself out, with Piper Hecht at the center of it all?