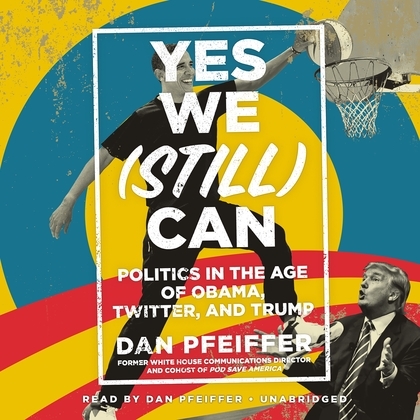 Yes We (Still) Can

From Obama?s former communications director and current cohost of Pod Save America comes a colorful account of how politics, the media, and the internet changed during the Obama presidency and how Democrats can fight back in the Trump era.

The Decade of Obama (2007?2017) was one of massive change that rewrote the rules of politics in ways we are only now beginning to understand (which is why we all got 2016 wrong). Yes We (Still) Can looks at how Obama navigated the forces that allowed Trump to win the White House to become one of the most consequential presidents in American history, why Trump surprised everyone, and how Democrats can come out on top in the long run.

Part political memoir, part blueprint for progressives in the Trump era, Yes We (Still) Can is an insider?s take on the crazy politics of our time. Pfeiffer, one of Barack Obama?s longest serving advisors, tells never-before-told stories from Obama?s presidential campaigns to his time in the White House, providing readers with an in-depth, behind-the-scenes look at life on the front lines of politics.