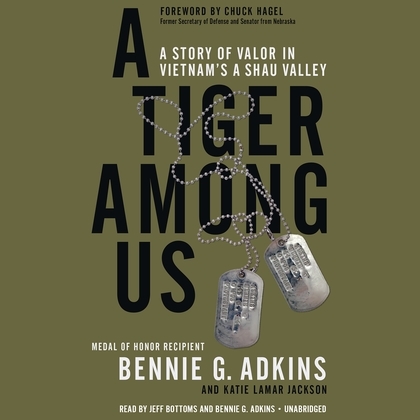 A Tiger among Us

An action-filled memoir by Medal of Honor recipient Bennie Adkins, whose heroic deeds as a Green Beret in Vietnam in March 1966 became legend in the Army.

For four days in early March 1966, then-sergeant Bennie Adkins and sixteen other Green Berets held their undermanned and unfortified position at Camp A Shau, a small training and reconnaissance camp located right next to the infamous Ho Chi Minh Trail, North Vietnam?s major supply route. Surrounded ten to one, the Green Berets endured constant mortar and rifle fire, treasonous allies, and a violent jungle rainstorm. But there was one among them who battled ferociously, like a tiger, and, when they finally evacuated, carried the wounded to safety. Forty-eight years later, Bennie Adkins?s valor was recognized when he received this nation?s highest military award.

A Tiger among Us tells the story of how this small group of warriors out-fought and out-maneuvered their enemies, how a remarkable number of them lived to tell about it, and how that tiger became their savior. It is also the tale of how Adkins repeatedly risked his life to help save his fellow warriors through acts of bravery and ingenuity.

Filled with the sights, smells, and sounds of a raging battle fought in the middle of a tropical forest, A Tiger among Us is alive with the emotional intensity of the besieged men as they lose many of their own while inflicting incredible losses on the North Vietnamese forces. A US pilot flying over the post-battle carnage described it as a ?wall of death.?

A Tiger among Us is a riveting tale of bravery, valor, skill, resilience, and perhaps just plain luck, brought to vivid life through the oral histories of Adkins and five of his fellow soldiers who fought in the Battle of A Shau.