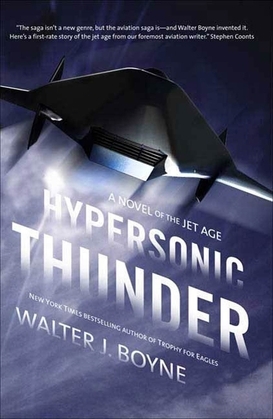 The jet age began in 1939 with the brief hop of a secret German airplane. Seventy years later, the entire world depends upon the jet engine in every sphere - political, military, economic, and social. In Hypersonic Thunder, Walter Boyne weaves an intricate story of how the jet engine changed aeronautics and astronautics, pushing the frontiers of flight forward and permitting humankind to enter the space age.

Drawing on his knowledge of the period, Boyne paints a gripping picture of jet aviation from the brilliant supersonic Concorde to the coming challenges of hypersonic flight. Using the fictional Shannons as a vehicle, the author ranges the world of aviation, combining the triumphs and tragedies of great aviation companies with the familiar conflicts of family life. All of the great names of aeronautics and astronautics appear here as they did on the historic scene, including such luminaries as Howard Hughes, Kelly Johnson, Burt Rutan, and Steve Fossett.

The book thunders with the clash of combat, ranging from the courageous fights of the Israeli Air Force down through the raid on Libya, Operations Desert Storm and Iraqi Freedom, and, most important the ongoing war on terror. And space is not neglected, as Boyne covers everything from Skylab and the Space Shuttle, with its great achievements and terrible tragedies, to the International Space Station.