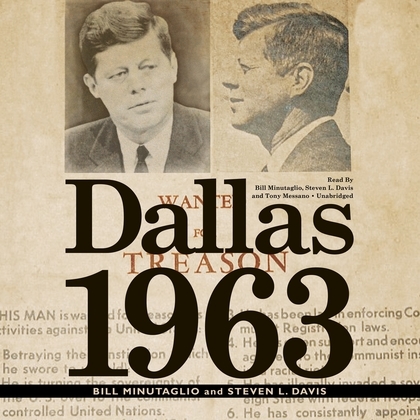 In the early 1960s, Dallas was brewing with political passions and full of extreme and unlikely characters, many of them dead set against a Kennedy presidency?rabid politicos like defrocked military general Edwin A. Walker; oil baron H. L. Hunt; W. A. Criswell, leader of the largest Baptist congregation in the world; and fanatical congressman Bruce Alger; along with a host of gangsters, unsung civil rights leaders, strippers, billionaires, and marauding police. Beginning with the campaign for Kennedy's election and set against a nation in transition, Bill Minutaglio and Steven L. Davis ingeniously explore the swirling forces that led numerous friends and aides to warn the president against stopping in Dallas on his fateful trip to Texas.

Breathtakingly paced, this book presents a clear, cinematic, and revelatory look at the twentieth century's most significant and terrifying political event. Published to coincide with the fiftieth anniversary of the Kennedy assassination, Dallas 1963 is not only a fresh look at a momentous political tragedy but a sobering reminder of how radical ideology turns ordinary Americans extraordinarily violent.