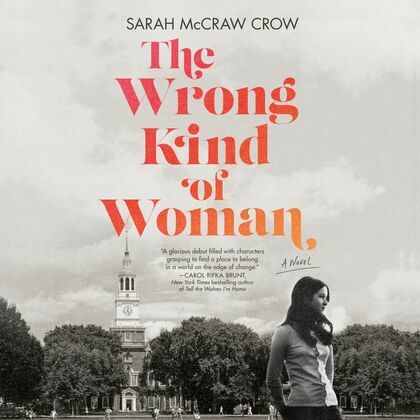 The Wrong Kind of Woman

?A glorious debut filled with characters grasping to find a place to belong in a world on the edge of change.? ?Carol Rifka Brunt, New York Times bestselling author of Tell the Wolves I?m Home

?McCraw Crow deftly navigates the campus and national politics of the ?70s in a way that remains timely and pressing today. A powerful, thought-provoking debut.? ?Amy Meyerson, Nationally bestselling author of The Bookshop of Yesterdays

In late 1970, Oliver Desmarais drops dead in his front yard while hanging Christmas lights. In the year that follows, his widow, Virginia, struggles to find her place on the campus of the elite New Hampshire men?s college where Oliver was a professor. While Virginia had always shared her husband?s prejudices against the four outspoken, never-married women on the faculty?dubbed the Gang of Four by their male counterparts?she now finds herself depending on them, even joining their work to bring the women?s movement to Clarendon College.

Soon, though, reports of violent protests across the country reach this sleepy New England town, stirring tensions between the fraternal establishment of Clarendon and those calling for change. As authorities attempt to tamp down ?radical elements,? Virginia must decide whether she?s willing to put herself and her family at risk for a cause that had never felt like her own.

Told through alternating perspectives, The Wrong Kind of Woman is an engrossing story about finding the strength to forge new paths, beautifully woven against the rapid changes of the early ?70s.