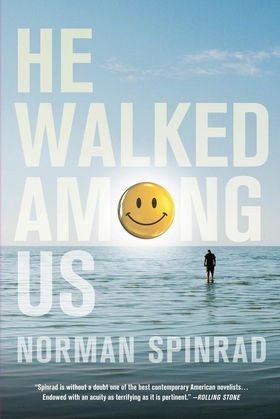 He Walked Among Us

When hack agent Jimmy "Tex" Balaban discovers Ralf on a Borscht Belt stage, his act appears to be a clever joke. Ralf claims to be from the future, shouting foul-mouthed prophecies of where we went wrong. And he delivers a harrowing message.

The world is in chaos. Our biosphere has been devastated, our air is unbreathable and the final stalwarts of mankind have taken refuge in pressurized shopping malls. Humanity clings to the last mediocre vestiges of life on a dead planet that we did not know how to save. But it might not be too late. Has Ralf returned to the past to awaken our consciences? Is he who he says he is or is he insane? And if we have one last chance to save the world, does any of this matter?

Then Dexter D. Lampkin, a fading science fiction writer, and Amanda Robin, a New Age guru-wannabe, magnificently transform Ralf into what the world really needs: a messenger sent from the future to save us from ourselves. Together with Tex they polish Ralf's television persona to captivate America. The problem is that Ralf never goes out of character. He truly believes he is a prophet.