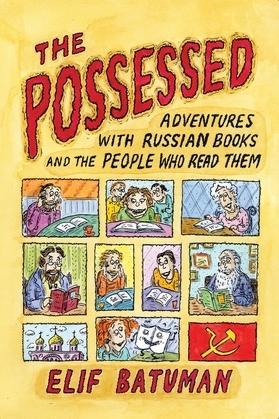 One of The Economist's 2011 Books of the Year


THE TRUE BUT UNLIKELY STORIES OF LIVES DEVOTED--ABSURDLY! MELANCHOLICALLY! BEAUTIFULLY!--TO THE RUSSIAN CLASSICS

No one who read Elif Batuman's first article (in the journal n+1) will ever forget it. "Babel in California" told the true story of various human destinies intersecting at Stanford University during a conference about the enigmatic writer Isaac Babel. Over the course of several pages, Batuman managed to misplace Babel's last living relatives at the San Francisco airport, uncover Babel's secret influence on the making of King Kong, and introduce her readers to a new voice that was unpredictable, comic, humane, ironic, charming, poignant, and completely, unpretentiously full of love for literature.

Batuman's subsequent pieces--for The New Yorker, Harper's Magazine, and the London Review of Books-- have made her one of the most sought-after and admired writers of her generation, and its best traveling companion. In The Possessed we watch her investigate a possible murder at Tolstoy's ancestral estate. We go with her to Stanford, Switzerland, and St. Petersburg; retrace Pushkin's wanderings in the Caucasus; learn why Old Uzbek has one hundred different words for crying; and see an eighteenth-century ice palace reconstructed on the Neva.

Love and the novel, the individual in history, the existential plight of the graduate student: all find their place in The Possessed. Literally and metaphorically following the footsteps of her favorite authors, Batuman searches for the answers to the big questions in the details of lived experience, combining fresh readings of the great Russians, from Pushkin to Platonov, with the sad and funny stories of the lives they continue to influence--including her own.