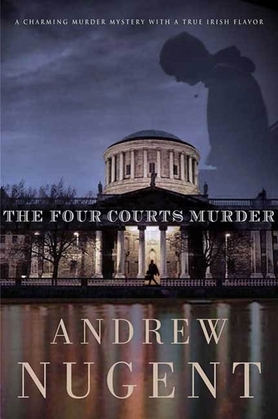 Justice Sidney Piggott was, everyone in Dublin's law professions agreed, designer-made for being throttled. If ever there was a judge more disliked---make that hated---in the courts of Ireland's capital city, no one knew his (or her) name. So when it comes to finding out who is responsible for the judge's demise, the number of possible suspects makes the task more difficult.

However, Inspector Denis Lennon and his sergeant, Molly Power, are given a lead. On the day of the murder, more than one person saw a mysterious young visitor lurking in the courtroom where Piggott was presiding over a thoroughly boring trial. Who was he? Why was he there? For whatever reason, Inspector, you have your killer. Except that neither Denis nor Molly feel right about jumping to that conclusion. The young man himself, whose thoughts the reader is privy to, is unsure whether he killed Piggott or only imagined it.

With tongue lightly in cheek, Nugent takes his reader from the Four Courts, Dublin's center of law, to rural Ireland, where a local priest has been killed, either by the young man or by a horse. The author introduces us to a married couple who specialize in stolen art and are somehow involved with Piggott.

Bring in a series of high and low Irish characters, add a delightful young German student who gives Molly unexpected assistance, stir them together, and you have a highly seasoned story in unusual settings, told with a small twinkle that will endear readers to this new author.