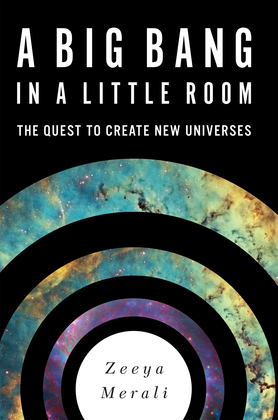 A Big Bang in a Little Room

An award-winning science writer takes us into the lab to answer some of life's biggest questions: How was the universe created? And could we create our own?

What if you could become God, with the ability to build a whole new universe? As startling as it sounds, modern physics suggests that within the next two decades, scientists may be able to perform this seemingly divine feat-to concoct an entirely new baby universe, complete with its own physical laws, star systems, galaxies, and even intelligent life. A Big Bang in a Little Room takes the reader on a journey through the history of cosmology and unravels-particle by particle, theory by theory, and experiment by experiment-the ideas behind this provocative claim made by some of the most respected physicists alive today. Beyond simply explaining the science, A Big Bang in a Little Room also tells the story of the people who have been laboring for more than thirty years to make this seemingly impossible dream a reality. What has driven them to continue on what would seem, at first glance, to be a quixotic quest?

This mind-boggling book reveals that we can nurse other worlds in the tiny confines of a lab, raising a daunting prospect: Was our universe, too, brought into existence by a daring creator?