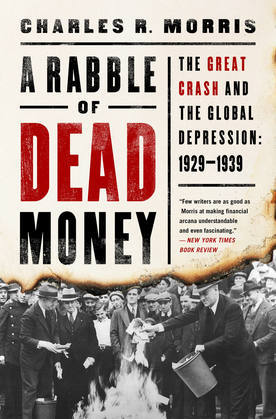 A Rabble of Dead Money

The Great Crash of 1929 profoundly disrupted the United States' confident march toward becoming the world's superpower. The breakneck growth of 1920s America -- with its boom in automobiles, electricity, credit lines, radio, and movies -- certainly presaged a serious recession by the decade's end, but not a depression. The totality of the collapse shocked the nation, and its duration scarred generations to come.

In this lucid and fast-paced account of the cataclysm, award-winning writer Charles R. Morris pulls together the intricate threads of policy, ideology, international hatreds, and sheer individual cantankerousness that finally pushed the world economy over the brink and into a depression. While Morris anchors his narrative in the United States, he also fully investigates the poisonous political atmosphere of postwar Europe to reveal how treacherous the environment of the global economy was. It took heroic financial mismanagement, a glut-induced global collapse in agricultural prices, and a self-inflicted crash in world trade to cause the Great Depression.

Deeply researched and vividly told, A Rabble of Dead Money anatomizes history's greatest economic catastrophe -- while noting the uncanny echoes for the present.