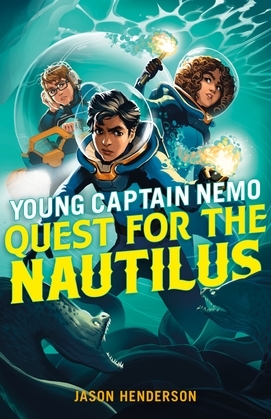 Armed with his wits, his friends, and his Nemotech submarine, a twelve-year-old descendant of Jules Verne?s famous antihero must race against the clock to save his kidnapped mother in Quest for the Nautilus: Young Captain Nemo, the second installment in Jason Henderson's action-packed middle grade series...

Gabriel Nemo has never been your normal, everyday twelve-year-old. As a descendant of the famous Captain Nemo, he?s determined to use his Nemotech legacy for good. He and his best friends Peter and Misty spend their days studying at the elite Nemo Institute and in their spare time, run rescue missions in Gabriel?s submarine The Obscure.

But when a mysterious organization using advanced technology attacks the Institute and kidnaps Gabriel?s mother, he and his friends set off on a race against the clock. They must find Captain Nemo?s long-lost ship, The Nautilus, before his mother's time runs out!

"There?s both futuristic and classic steampunk appeal here, admirably mixing Jules Verne lore with 007-level gadgetry. Stakes are high, the pace is fast, and there are excellent (and surprisingly subtle) messages of coping with childhood loneliness and the importance of taking care of our planet?s oceans." ?Booklist on Young Captain Nemo