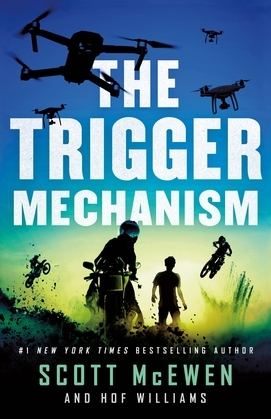 The Trigger Mechanism is the second book in the Camp Valor series by the #1 New York Times bestselling co-author of American Sniper, Scott McEwen.

When, Jalen, a young gamer, puts on a set of VR goggles and logs into an online video game, he enters a digital world where, as in most games, points are awarded for kills. Only this time, unbeknownst to Jalen, the game has been reengineered by a cyberterrorist known as Encyte so that real human lives are taken with the click of a button. When Jalen logs off, he learns he?s just killed fifty-three innocent people.

Wyatt Brewer, Camp Valor?s top camper, is tapped to investigate and see if a link exists between Encyte and The Glowworm Gaming Network, which Wyatt helped dismantle the previous summer. Wyatt is still reeling from the losses inflicted by Glowworm and by the betrayal of his mentor, Sargent Halsey. When Wyatt meets Jalen, he finds a clue, and Julie Chen, a teenage prodigy and gaming superstar known as Hi_Kyto becomes the leading suspect.

Wyatt knows he?ll need Jalen?s help if he has any chance of penetrating the gaming world and getting close to Hi_Kyto. And Jalen will need Camp Valor if he?s going to have any chance of rebuilding his life and finding redemption.

But as the summer season starts at Valor, the Department of Defense threatens to shut the secret program down. A reclusive billionaire and Camp Valor alum offers a way forward?funded by him but without Valor for protection. Jalen and Wyatt are forced to consider going out on their own if they want bring Halsey to justice and to stop Encyte.