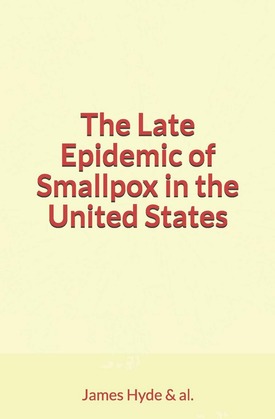 The Late Epidemic of Smallpox in the United States

This book deals with the Late Epidemic of Smallpox in the United States.

"The adaptability of man to his environment is one of many generous provisions for his welfare. But it is a provision with conditions. The adaptation once secure, even a temporary failure of complete adjustment to the environment may be perilous. The commercial travelers of all countries are accounted, on the whole, as of a healthy class; they breathe all airs, they drink all waters, they consume all foods with impunity. They are rarely adjusted to a single environment for any length of time. The farmer, on the other hand, long habituated to his narrow circle of surroundings, would often become seriously ill if for a time he should leave his farm and village to breathe the air and drink the water and consume the food that are familiars of the traveling salesman who would sell a lightning-rod for the protection of the farmhouse. This adaptability extends to a surprising degree; toward the limit of endurance of toxic agencies. The farmer whose case has been supposed may year after year drink with impunity the water from a well contaminated with germs that would promptly induce typhoid fever in one wholly unaccustomed to a daily dosage of the poison. But the same farmer may lose his immunity if for any length of time he removes to another residence and afterward, returning to his own place, makes use of the contaminated water to which he was once habituated. The greatest peril from loss of adaptation to environment lies in the changes wrought by the sudden removal of a man from his country home, or even from a less salubrious city residence, to a situation where men are massed together in considerable number..."