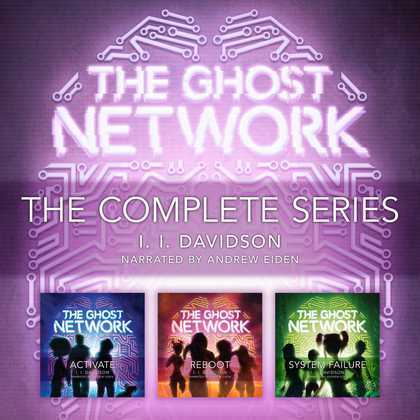 Join in on this thrilling middle-grade adventure trilogy based in the digital age. Teenage hackers John, Slack, Akane, and Salome come together to protect the world from disasters in the Dark Web as man takes on machine. Only . . .  they’re on the machine’s side.

This diverse group of kids from all over the world has plenty in common. They love computers, coding, hacking, and gaming—it literally flows through their veins. One more thing: they are all technically dead. At the Wolf's Den in Alaska, a top-secret school for technological excellence, things take a dark turn when they uncover that the center is working on a potentially dangerous, secret project known as Project 31. What's worse, they realize they're the guinea pigs who have been implanted with artificial intelligence. John's father has gone missing under mysterious circumstances, and now, they’re all being hunted. There's only one way out: to escape across the brutal Alaskan tundra.

The secret is now out about the Ghost Network's identities . . . and everything is in danger of going up in smoke. With evil tech icon, Roy Lykos, on the prowl, John and the gang head to the top-secret Scarab's Temple in the Sahara desert to prepare for battle. This center has specific entry criteria: every pupil there has artificial intelligence implants. As the day of reckoning approaches, the Ghost Network gang will need every bit of help they can get from their extraordinary classmates if they are to wrestle back control of their minds and bodies.

The gang is back in the Wolf's Den in Alaska and is finally ready to put their abilities toward forces for good. The threat of tech icon Roy Lykos has finally been put to rest . . . or has it? His tentacles of power may stretch further than John had initially thought as he begins to question even his father's loyalty. A strange invitation from the Ma'yaarr Complex in Brazil, rumored to have gone rogue, sends the gang on a journey across the deep, dark jungle. However, nothing is as it seems. With the stakes higher than ever, will their A.I connection still hold true? They don't have much time to figure out exactly what's' going on and make the right decisions in this action-packed final installment of the series.