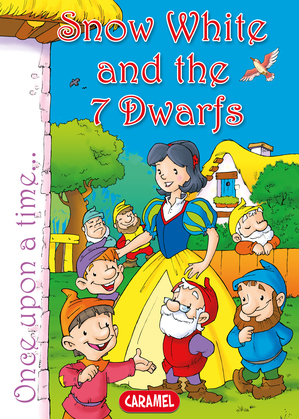 Snow White and the Seven Dwarfs

Once upon a time was a pretty princess called Snow White. Unfortunately, her mother the queen died when she was still a baby and her father remarried a beautiful but evil woman. As she wished to remain the most beautiful woman in the whole kingdom, she kept asking her magic mirror who was the most beautiful woman. The mirror always answered that she was, until one day he pronounced Snow White's name. Red with anger, the queen decided to get her revenge...

Once upon a time there was a pretty young princess who had skin as white as snow and hair as black as ebony. She was called Snow White. Her mother, the queen, unfortunately died soon after she was born and her father got married again to a beautiful but very wicked woman.
The new queen wanted to be the most beautiful woman in the kingdom. Every morning, she would look into her magic mirror and ask
"Mirror, mirror, on the wall, who is the fairest one of all?"
The mirror would always reply, "You, Oh Queen, are the fairest one of all." But one day, the mirror told the evil queen that Snow White was now the fairest one of all. The queen turned pale and furious!