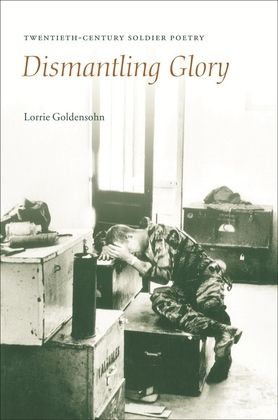 by Lorrie Goldensohn (Author)
Non-Fiction Literary essay
EPUB
unlimited loans, One at a time
Details
Dismantling Glory presents the most personal and powerful words ever written about the horrors of battle, by the very soldiers who put their lives on the line. Focusing on American and English poetry from World War I, World War II, and the Vietnam War, Lorrie Goldensohn, a poet and pacifist, affirms that by and large, twentieth-century war poetry is fundamentally antiwar. She examines the changing nature of the war lyric and takes on the literary thinking of two countries separated by their common language.

World War I poets such as Wilfred Owen emphasized the role of soldier as victim. By World War II, however, English and American poets, influenced by the leftist politics of W. H. Auden, tended to indict the whole of society, not just its leaders, for militarism. During the Vietnam War, soldier poets accepted themselves as both victims and perpetrators of war’s misdeeds, writing a nontraditional, more personally candid war poetry.

The book not only discusses the poetry of trench warfare but also shows how the lives of civilians—women and children in particular—entered a global war poetry dominated by air power, invasion, and occupation. Goldensohn argues that World War II blurred the boundaries between battleground and home front, thus bringing women and civilians into war discourse as never before. She discusses the interplay of fascination and disapproval in the texts of twentieth-century war and notes the way in which homage to war hero and victim contends with revulsion at war’s horror and waste.

In addition to placing the war lyric in literary and historical context, the book discusses in detail individual poets such as Wilfred Owen, W. H. Auden, Keith Douglas, Randall Jarrell, and a group of poets from the Vietnam War, including W. D. Ehrhart, Bruce Weigl, Yusef Komunyakaa, David Huddle, and Doug Anderson.

Dismantling Glory is an original and compelling look at the way twentieth-century war poetry posited new relations between masculinity and war, changed and complicated the representation of war, and expanded the scope of antiwar thinking.